I’m a sucker for waterfalls. Always have been. One of my earliest memories is a family trip to Niagara Falls. The mental images are faded now, but in that sepia toned recollection I distinctly recall rows of yellow rain jackets lined up on the dock for tourists boarding Lady of the Mist. A sturdy vessel she was, as her sole itinerary was to transport tourists like us perilously close to the crushing deluge of North America’s most powerful waterfall. Under this magnificent spectacle we all marveled with wide-eyed astonishment at the combined force of water and gravity. To my 4 or 5 year old imagination, this was as cool as nature gets. Little did I know at the time, but that drenching would set me on a path to seek out cascades around the globe, and most recently to the world’s largest waterfall: Iguazú.

Stephanie appreciates a good waterfall, but had an opportunity to visit a school for indigenous crafts in Paraguay. With a year of traveling together, we decided it’s important for us to carve out times like this to make the most of our individual journeys. You can read all about Steph’s experience at the school here.

My basecamp for this adventure was Nomad’s hostel in Puerto Iguazú, Argentina. Having arrived at midday following a 17+ hour bus ride from Buenos Aires, I used my first day in town to recoup and form a game plan for the visit. Following a tip from the host at the front desk, I took a stroll to the edge of town to watch the sunset. Rio Iguazú carves a border between Argentina and Brazil, and converges here with Rio Paraná, landlocked Paraguay’s only outlet to maritime trade. Several miles upstream from this confluence stands Cataratas del Iguazú, a network of falls so massive its mist affects the local weather. Maybe – I just made that last part up.

A confluence of 3 countries

The plan was to wake up early and head to Parque Nacional Iguazú, but the previous day’s recuperation was not enough to make up for my insomnia riddled bus ride. Alas, I got to the park around noon. The Argentinian side of the falls is renowned for its miles of subtropical paths that offer varied views and a chance to encounter the wildlife of the region. Opposite, the Brazilian side provides fewer paths, but a whole panoramic view of the falls. Unfortunately for me, it’s a pain in the neck to get a Brazilian visa as an American, and I didn’t quite have the time or money to finagle my way across the border to capture the whole view. If your nationality affords you the opportunity, I hope you take it as I hear it’s quite impressive.

I opted to start with Circuito Inferior, which speaks to its elevation, not its views of the falls. I’m glad I began the tour here, as this path gradually builds up the anticipation by winding its way past several smaller falls before the big reveal.

For scale, this middle section is roughly the size of Niagara

The river was too high for the free ferry to Isla San Martín, but the path to its dock presented some of the best views from lower water level.

After thoroughly exploring the lower section, it was time to move up to Circuito Superior. Mercifully, the crowds were more spread out and I was able to take my time without jostling for space with the selfie-stick-heads.

In the distant horizon in La Garganta del Diablo, the largest section of the falls. We’re talking a lot of waterfall between here and there

Feeling lucky with this shot 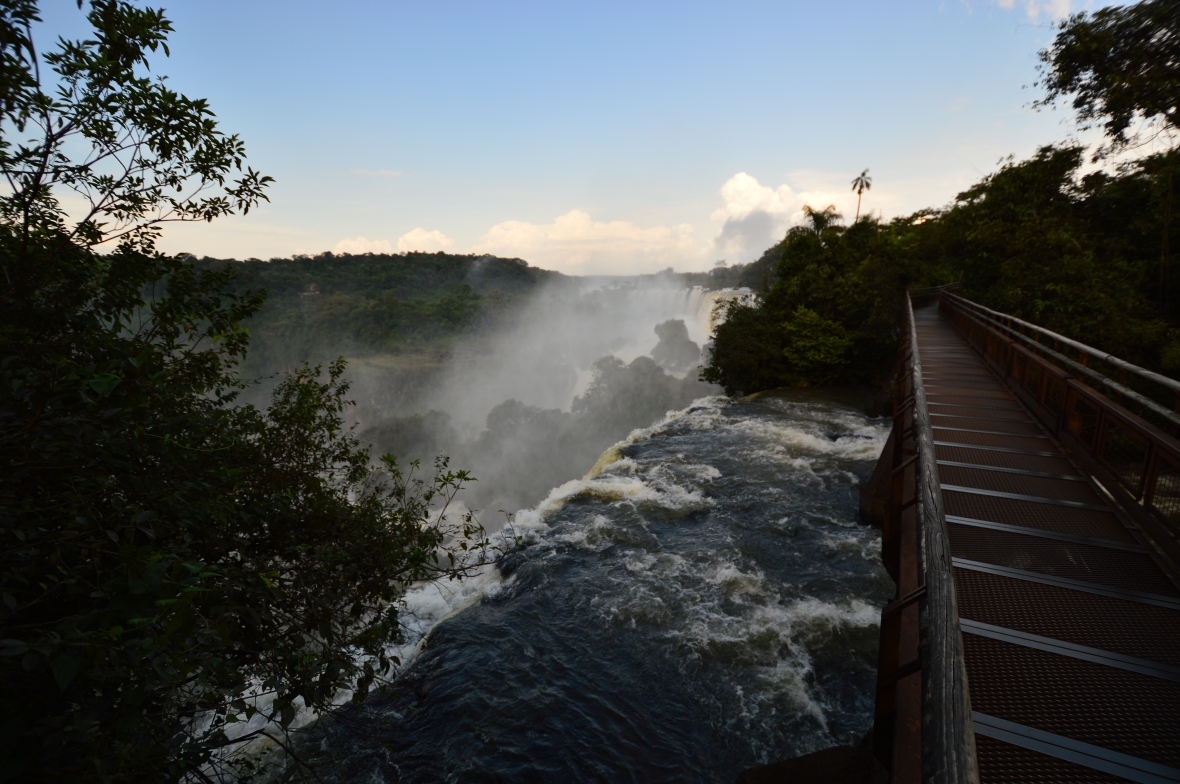 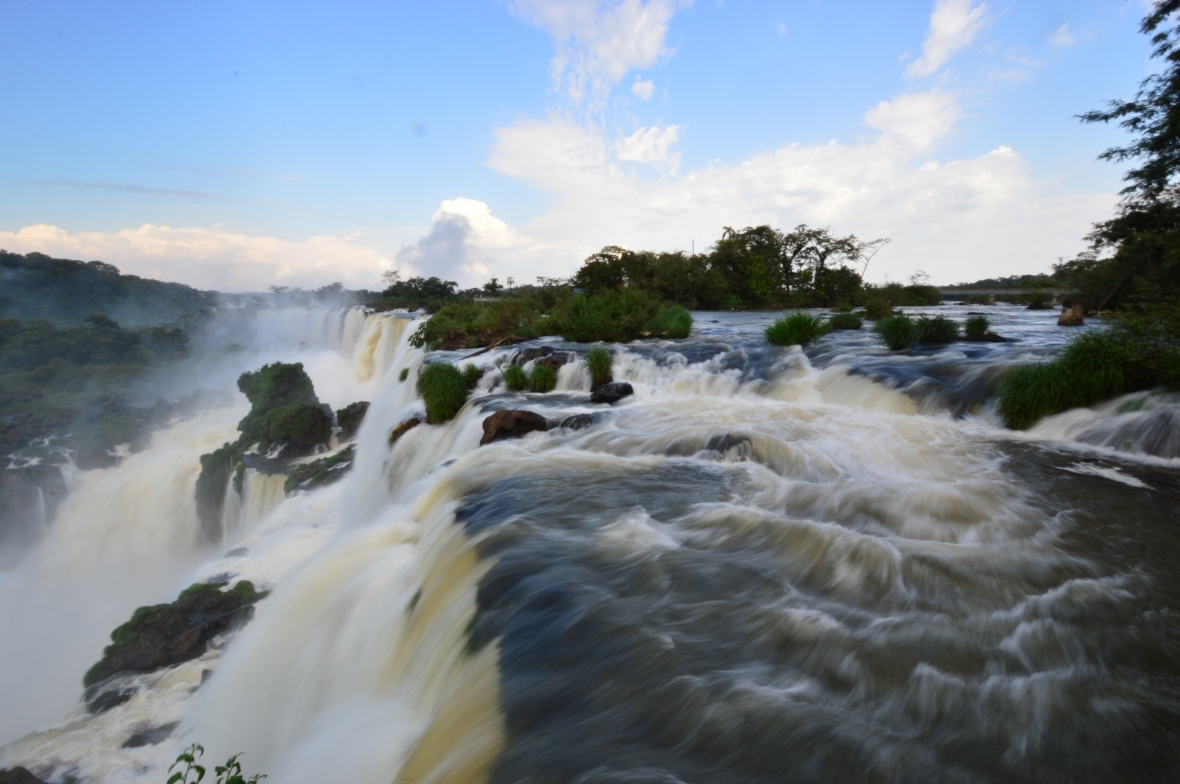 Messing around with shutter speeds never felt so good

It’s hard to overstate just how big this waterfall is. After completing the lower and higher trails, I took the park’s train to the crown jewel of the falls: La Garganta del Diablo. You read that right – the falls extend so far you need to travel by train to see the whole thing. After the train you walk roughly a kilometer out into the river to reach the main viewing platform. The river is so wide you’d think you’re walking over a lake, if the water weren’t moving furiously in the direction of thunderous crashing. 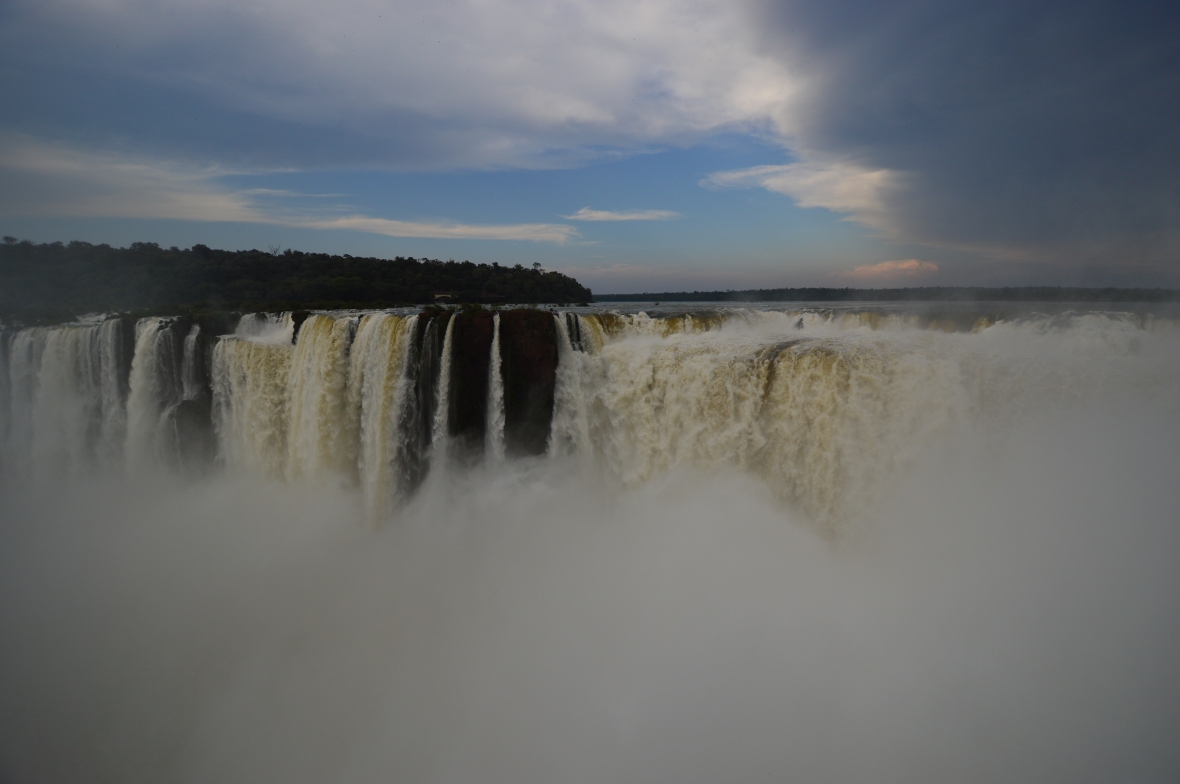 You have to squint to see them, but those birds are my heroes

Double rainbow – what does it mean?

My late start to the day turned out to be a blessing in disguise. The park closes at 6, which is just about time for sunset in mid-April at Iguazú. As the sun sinked low behind me, it caught the mist just right to make the complete rainbow rings around the falls. A park ranger piped on his whistle for “last call” just as the golden hour was getting started. If it were up to me I would have stayed another 45 minutes to see how the lighting would have progressed. But who am I to complain? My last photos turned out to be among may favorites. I suspect travelers visiting closer to the winter solstice in June will get a shot at full sunsets during park hours.

Seriously, who built these things? 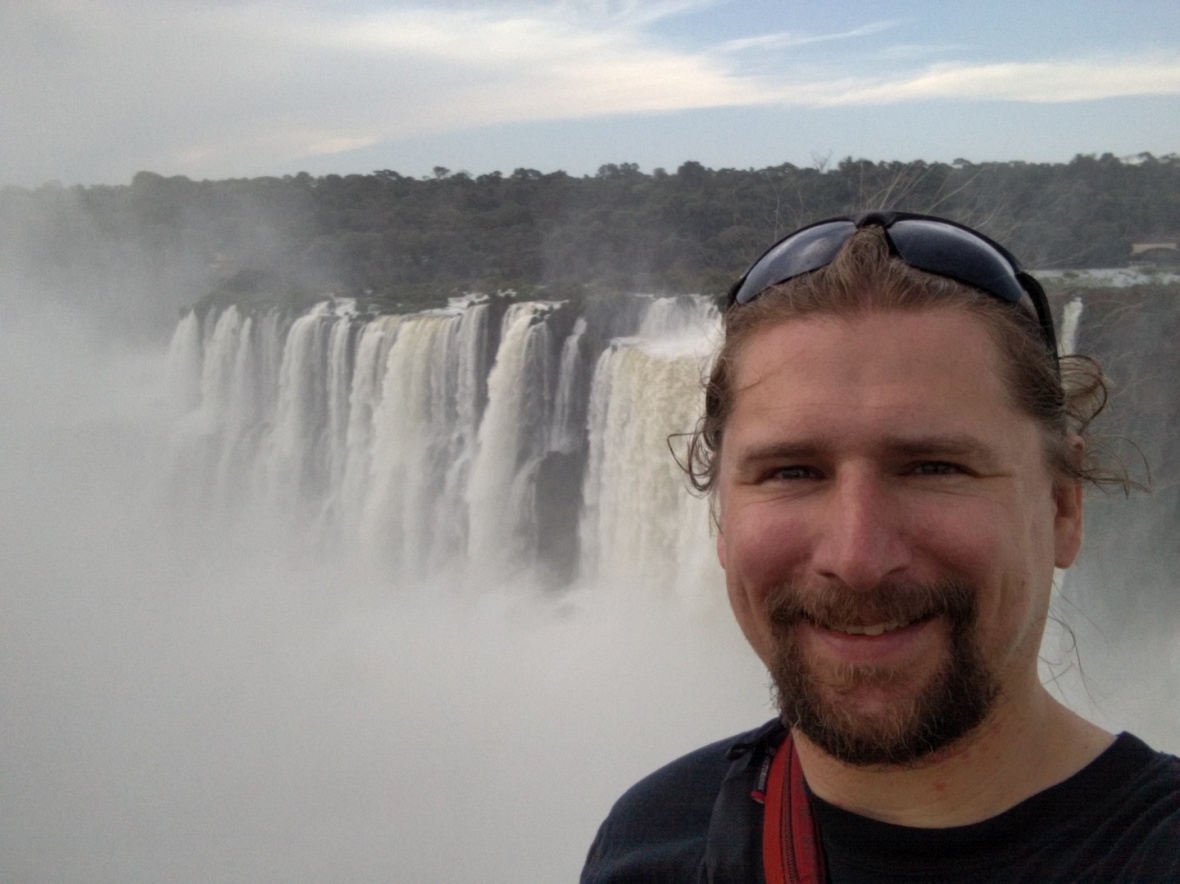 Your author is having a very good day

Panorama from my phone. Remember this is only one section. Yeesh!

A second day at Parque Nacional Iguazú opens up the possibility to explore the lesser known trails. Again on a tip from my hostel host, I decided to check out Sendero Macaco, a 3.5 km path through the subtropical forest. If you only have one day to see Iguazú I wouldn’t recommend it, but time permitting it’s a nice long walk into the lush jungle with plenty of opportunities to see wildlife.

The previous day I brought my wide-angle lens to capture the falls in all their grandeur. This time I took my trusty zoom lens to get a closer perspective. I am very glad I did. 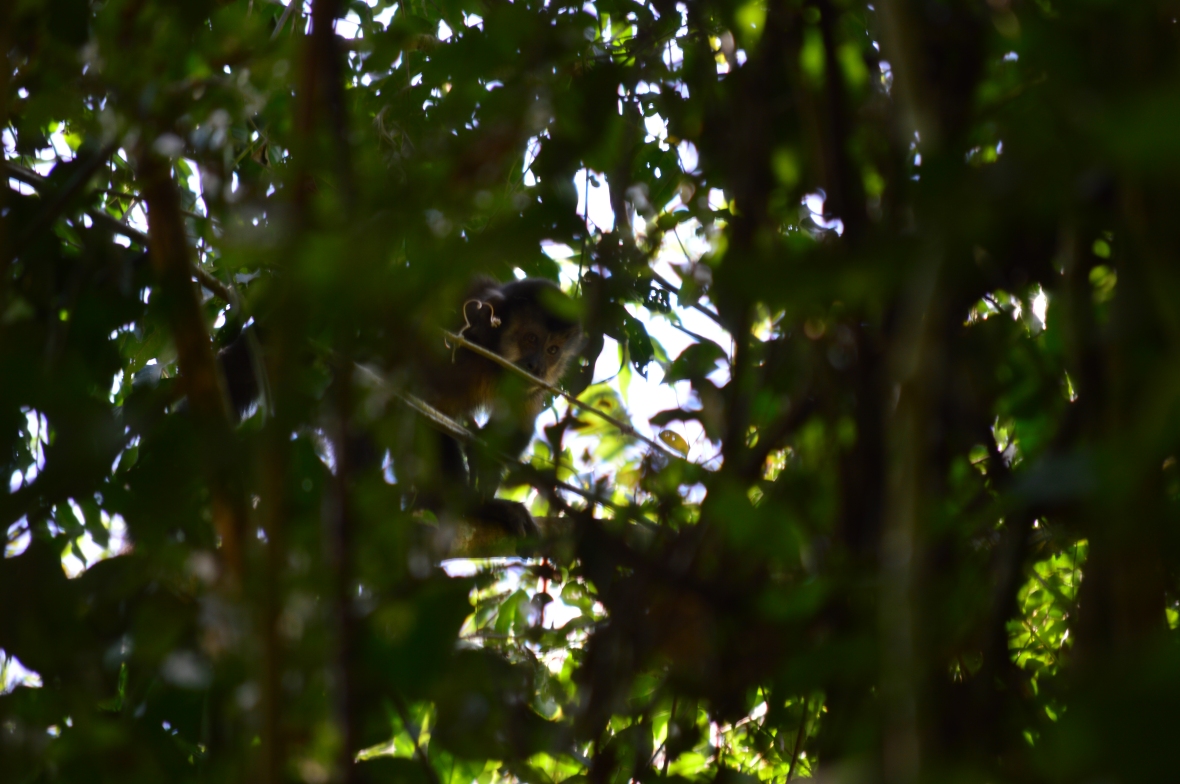 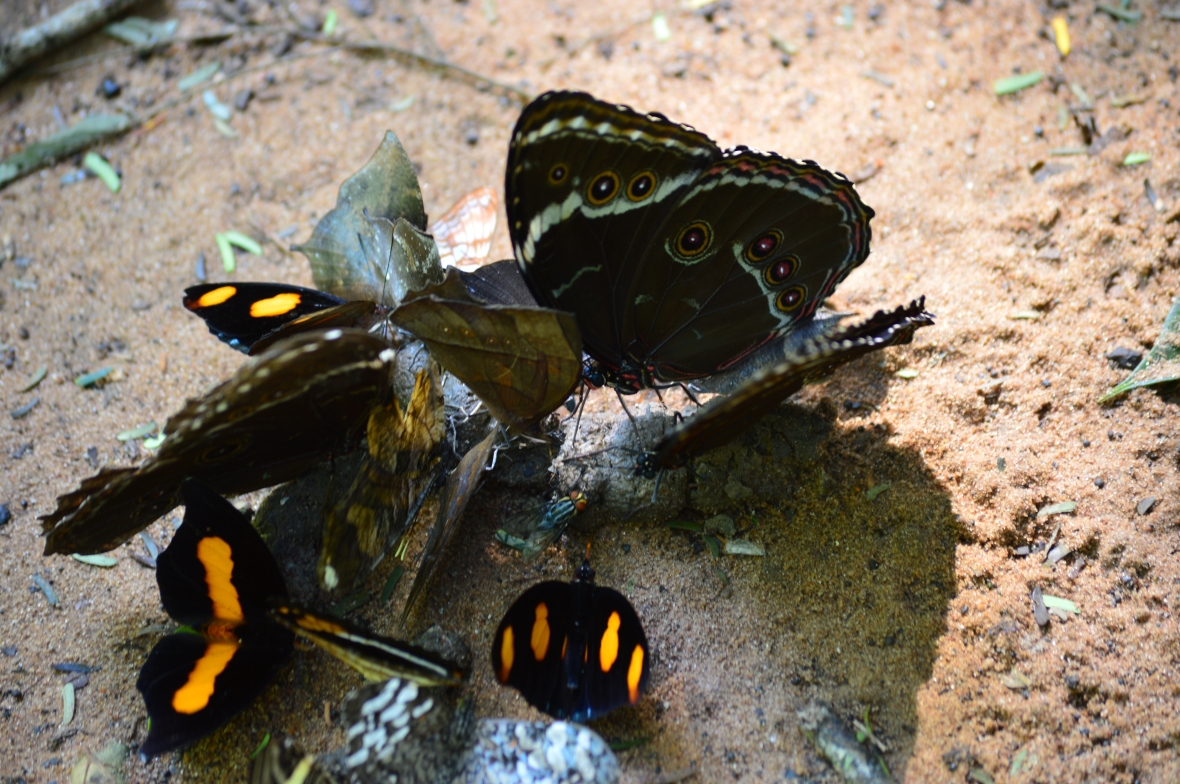 Beautiful butterflies, no? That’s a turd they’re chowing down on 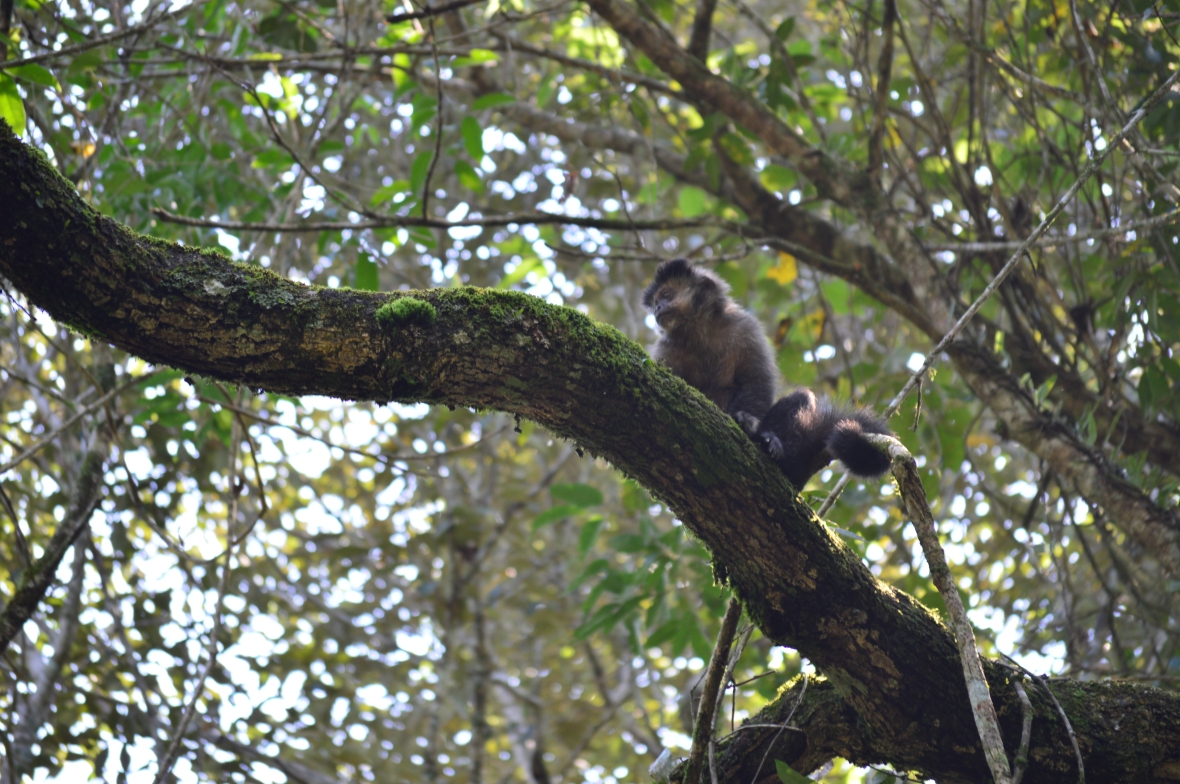 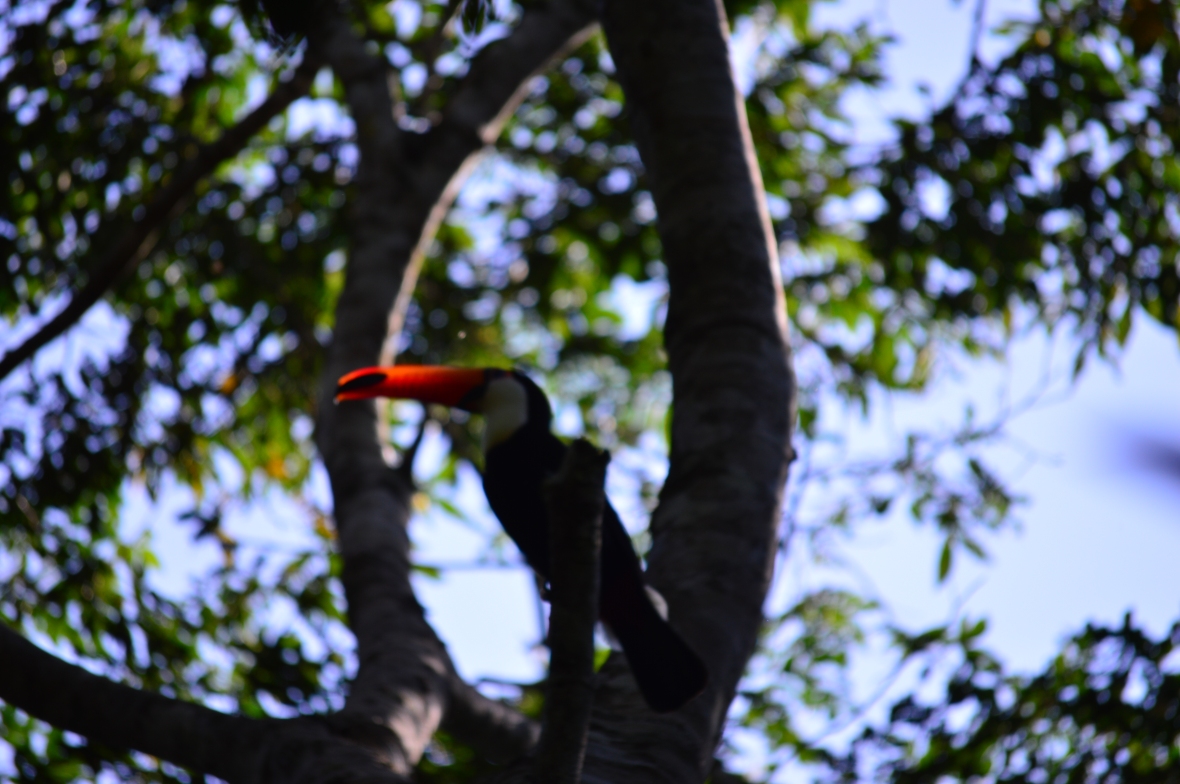 Iguazu is home to more butterflies than any place I’ve visited. This was the only of its kind I saw in 2 days

You’re never too young to fly

Did I mention the trail ends with a waterfall you can swim under? A sweaty hour and a half of mosquitos and poorly broken in sandals all of a sudden seem totally worth it. 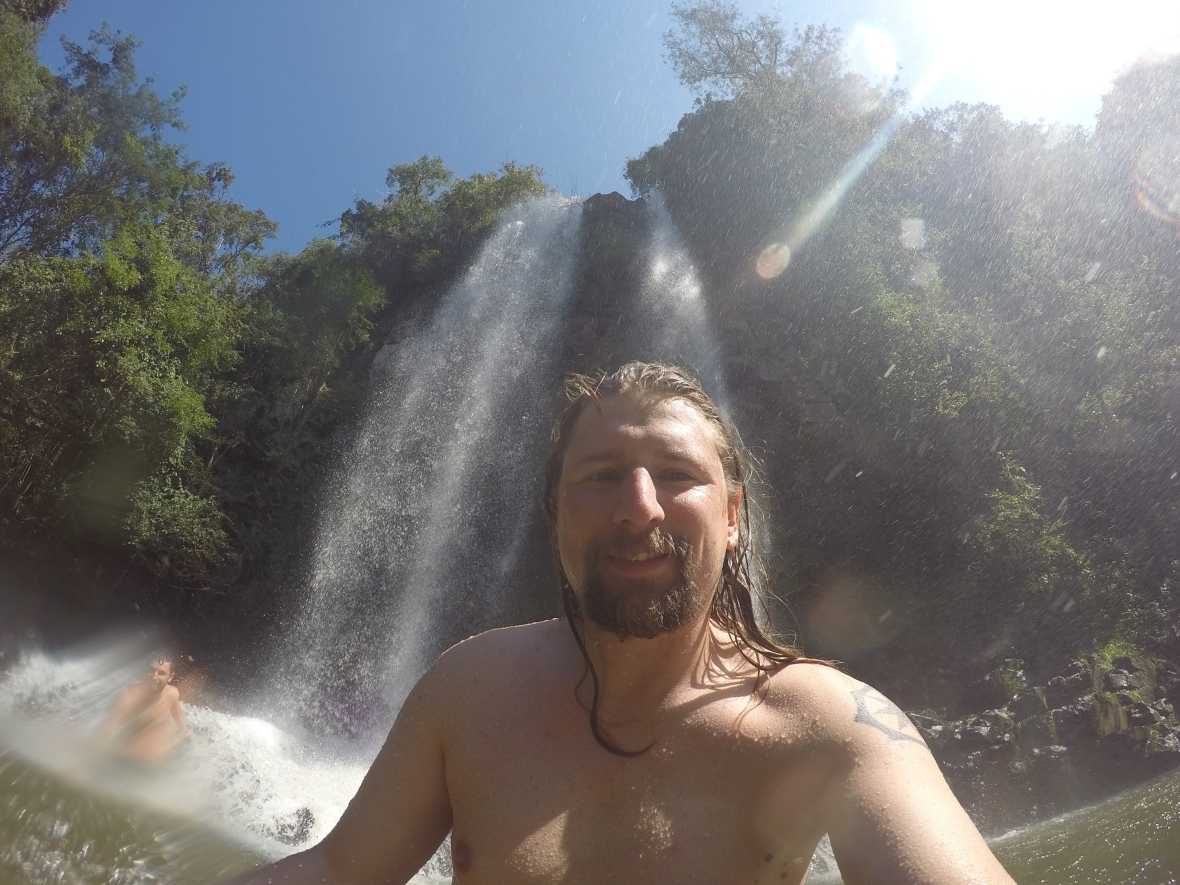 That’s a happy dude right there

I wound up spending a lot more time on Sendero Macaco trail than I originally planned. Turns out by the time I was done chasing animals and playing in the water, I just barely made it on the last train to Garganta del Diablo. Again I wish they didn’t rush us out of there, but I was really grateful for the chance to get another look at this magical spot. 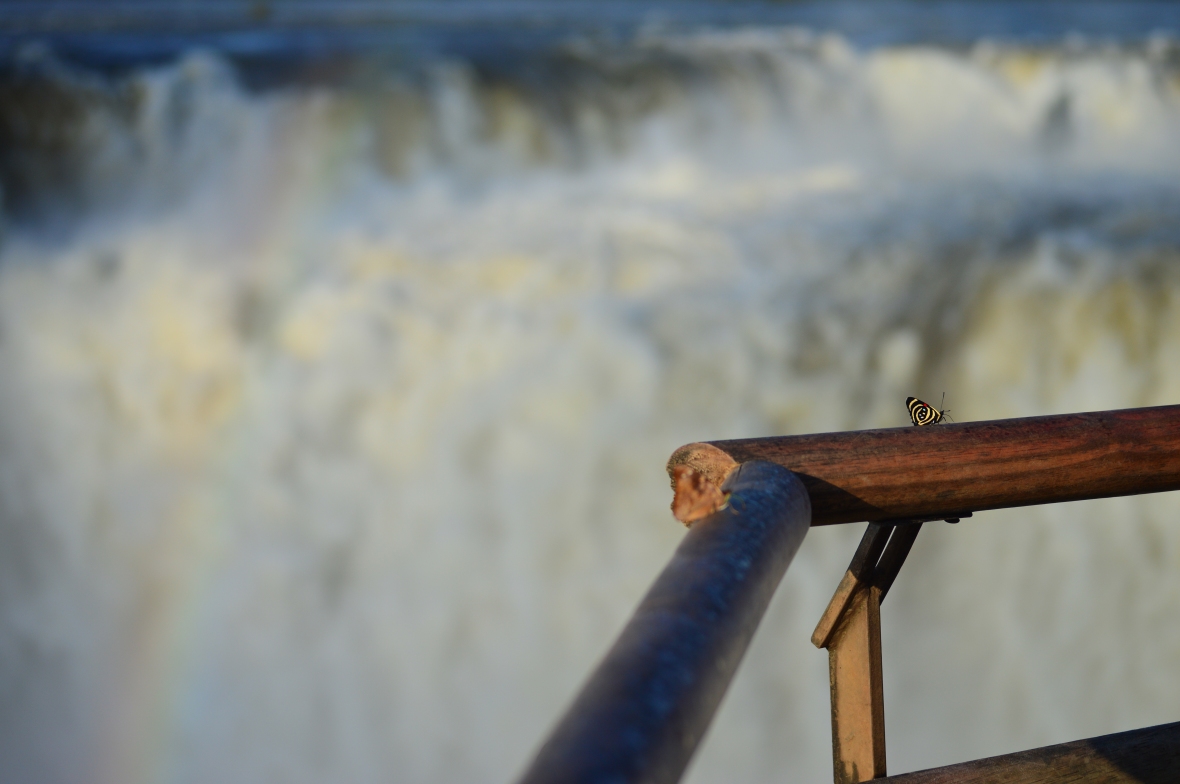 One thought on “Chasing waterfalls at Iguazú”